Two important Wilson texts are to be released this year. Colin Stanley is to release the final, definitive version of his very comprehensive Wilson bibliography next month. Limited to just 50 numbered copies – now 49 as I’ve just bought one – it can be obtained for £25 including UK post if ordered before publication date of March 2nd 2015. Post-publication price will be £29.95, again with free post to UK addresses. This book is an essential reference tool for those who need to understand Wilson’s vast and sprawling oeuvre. This fourth edition includes –
• All 180 published books by the author.
• 626 of his published articles.
• Over 168 Introductions, Prefaces, Forewords.
• 336 book reviews.
• Over 430 books and articles about his work.
• 1500 reviews of his books.
• His television and radio appearances.

Published just a year after Colin Wilson’s death in December 2013, this comprehensive, annotated bibliography of primary and secondary sources has been fully revised and updated, incorporating an author chronology and an exhaustive index. Aimed at scholars, collectors and fans worldwide it also includes details of non-English translations of Wilson’s work. An essential guide to a writer and thinker, who has left the legacy of an extraordinary body of work.
Order through booksellers or send a cheque for £29.95*, payable to Colin Stanley, to: Paupers’ Press, 37 Quayside Close, Trent Bridge, Nottingham NG2 3BP United Kingdom.

* Includes postage and packing to UK addresses.
Or pay through PayPal to: stan2727uk@aol.com

Meanwhile, the book that Colin was working on before his stroke has been completed by his son Damon. Entitled An End to Murder, it will be published this September by Robinson in the UK and Skyhorse in the US. This promises to be a very interesting title:
Creatively and intellectually there is no other species that has ever come close to equalling humanity’s achievements, but nor is any other species as suicidally prone to internecine conflict. We are the only species on the planet whose ingrained habit of conflict constitutes the chief threat to our own survival. Human history can be seen as a catalogue of cold-hearted murders, mindless blood-feuds, appalling massacres and devastating wars, but, with developments in forensic science and modern psychology, and with raised education levels throughout the world, might it soon be possible to reign in humanity’s homicidal habits? Falling violent crime statistics in every part of the world seem to indicate that something along those lines might indeed be happening.
Colin and Damon Wilson, who between them have been covering the field of criminology for over fifty years, offer an analysis of the overall spectrum of human violence. They consider whether human beings are in reality as cruel and violent as is generally believed and they explore the possibility that humankind is on the verge of a fundamental change: that we are about to become truly civilised.
As well as offering an overview of violence throughout our history – from the first hominids to the twenty-first century, touching on key moments of change and also indicating where things have not changed since the Stone Age – they explore the latest psychological, forensic and social attempts to understand and curb modern human violence.
To begin with, they examine questions such as: Were the first humans cannibalistic? Did the birth of civilisation also lead to the invention of war and slavery? Priests and kings brought social stability, but were they also the instigators of the first mass murders? Is it in fact wealth that is the ultimate weapon?
They look at slavery and ancient Roman sadism, but also the possibility that our own distaste for pain and cruelty is no more than a social construct. They show how the humanitarian ideas of the great religious innovators all too quickly became distorted by organised religious structures.
The book ranges widely, from fifteenth-century Baron Gilles de Rais, ‘Bluebeard’, the first known and possibly most prolific serial killer in history, to Victorian domestic murder and the invention of psychiatry and Sherlock Holmes and the invention of forensic science; from the fifteenth-century Taiping Rebellion in China, in which up to 36 million died to the First and Second World Wars and more recent genocides and instances of ‘ethnic cleansing’, and contemporary terrorism. They conclude by assessing the very real possibility that the internet and the greater freedom of information it has brought is leading, gradually, to a profoundly more civilised world than at any time in the past. 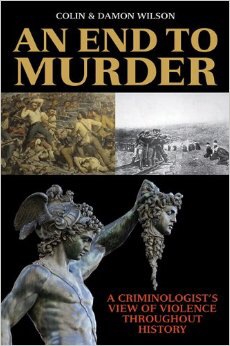 3 thoughts on “Publishing news: An End to Murder, plus The Ultimate Colin Wilson Bibliography”

Gospel According to Beelzebub

All Things Creative
Ritual in the Dark

Essays and Reflections On The Work of Colin Wilson

Skulls in the Stars

The intersection of physics, optics, history and pulp fiction

The latest news on WordPress.com and the WordPress community.