Writer and philosopher whose work, beginning with ‘The Outsider’, searched for the meaning of man’s existence
Colin Wilson was one of the most prolific and eclectic writers of the 20th century. In more than 150 books and countless articles and contributions to other works, published over 50 years, he covered subjects as diverse as existentialism, esotericism and the occult, religion, biography and several volumes of autobiography. It is his groundbreaking work on existentialism and creative thinking, The Outsider, published to wide critical acclaim in 1956, that remains his best known work.
Wilson was born in Leicester in 1931, the son of a shoemaker. He left school aged 16 and over the next eight years took on a variety of unskilled jobs while writing. “I kept a voluminous journal, which was several million words long by the time I was 24,” he recalled. Since the age of 12 he had been preoccupied with asking the meaning of human existence and at 14 had read George Bernard Shaw’s Man and Superman, from which he realised that “I was not the first human being to ask the question.”
Living rough on Hampstead Heath, working at a café and spending his days at the Reading Room of the British Museum, he had been trying to write a novel when the outline of The Outsider came to him. Photographs from the time show the handsome bohemian figure sitting alone, leant against a tree, wrapped in a sleeping bag and with a book in hand.
Inspired by the title and content of Camus’ novel l’Etranger (The Outsider, 1942), he sought to rationalise the psychological dislocation associated with Western creative thinking. Wilson took the outline and sample pages to the publisher Victor Gollancz, who immediately accepted the book. Published on 26 May 1956, The Outsider sold out of its initial print run of 5,000 copies in one day.
Cyril Connolly said it was “one of the most remarkable first books I have read for a long time” while Philip Toynbee called it “a real contribution to our understanding of our deepest predicament”. It shows how artists and writers such as Van Gogh, Kafka and Hemingway are affected by society and how they in turn, as “outsiders”, impact on society. John Osborne’s Look Back in Anger had just opened at the Royal Court and the term “Angry Young Men”, invented by JB Priestley, was first used in the New Statesman the following week and stuck. Although Wilson said it was not a group with which he identified, his later work The Angry Years (2007), recalls the period and the characters of Osborne, Kingsley Amis and others.
The Outsider made Wilson £20,000 (equivalent to £430,000 today) in its first year. He said later that he had not been surprised by the positive reaction but had not anticipated what followed – “the tremendous backlash, and the attacks on me which I found pretty hard going.” Referring to Religion and the Rebel (1957), his novel Ritual in the Dark (1959) and other works over the coming decade, he noted, “I’d produce some book which I knew to be brilliant and I’d get lousy reviews.” Evidently, the literary Establishment was not pleased at an uneducated, working class writer getting so much attention and praise, despite their initial enthusiasm. With media attention now focused on Wilson’s domestic affairs, his publisher suggested he leave London for Cornwall, where he remained for the rest of his life.
Wilson’s book The Strength to Dream (1962), a study of imagination in literature, had a title he later said he should have used for his autobiography, based on a phrase by George Bernard Shaw: “Every dream can become a reality in the womb of time for those who have the strength to dream.” Wilson was one who had that strength to dream and to see his dreams become reality in print.
In his Introduction to the New Existentialism (1966), Wilson revisited the themes of The Outsider, suggesting that the “old” existentialism “was a philosophy of man without an organised religion… Man stood alone.” He believed the challenge the “new existentialism” has to face is this: “Can it again point to a clear, open road along which thought can advance with the optimism of the early romantics?” He goes on to demonstrate that it indeed can. Elsewhere he speaks of those “curious moments of inner freedom” or (in his memoir Voyage to a Beginning) “visionary intensity”, which hint at a purpose in an otherwise meaningless world.
Towards the end of the 1960s an American publisher commissioned Wilson to write a book on the occult. This took him in a new direction, towards the realms of the esoteric and alternative history, at a time of considerable interest in New Age subjects. The Occult: A History (1971), revived Wilson’s critical reputation. “The reviews had a serious and respectful tone that I hadn’t heard since The Outsider,” he wrote. “With a kind of dazed incredulity, I realised that I’d finally become an establishment figure.” He developed an interest in crime, particularly the psychology of murder; his later works continued in the dual veins of existentialism and mysticism, but all touching in some way on what he called the “curious power of the mind that we hardly understand”.

Wilson had suffered a stroke in June 2012 and was no longer able to speak. He died in hospital with his wife Joy and daughter Sally at his side.

The few other newspaper obits that have appeared aren’t as knowledgable as the above, sadly. It’s all about knowing your place and not getting too clever.
The Times actually expect money for this scissors and paste atrocity. Read it here for nothing, as that’s all it’s worth. (Thanks to Colin S. and Frank).
The Torygraph (didn’t they know CW edited the Thatcher-friendly Marx Refuted?) has this rather more generous attempt. 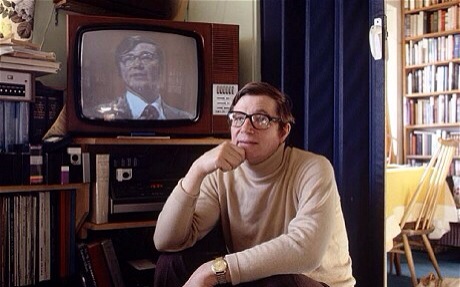 Another from The Guardian. Apparently written by someone who died in 2010! Fortean Times have been informed of this remarkable achievement.

This is an excellent appraisal of CW, concentrating on The Occult and it’s central thesis.

Here’s an interesting piece at The Daily Grail by David Metcalfe.

Local obituary from This is Cornwall.

And another from the other end of England

BBC piece. I do like this sentence, describing the post-Outsider Cycle era – “In later years, however, he confounded critics with a prolific output in dozens of unconnected genres”.

An ill-timed attempt at humour backfired at The Indy, causing it’s author a little concern. Here is a refutation of most of the points made.
A letter appeared in The Independent on the 15th of December –

This writer was no ‘silly myth’

“Don’t create silly myths about yourself,” writes Terence Blacker of Colin Wilson (“Eternal Outsider”, 10 December). He declares himself unimpressed by the photograph of the writer with “swotty polo-neck and specs” which appeared on the back cover of Wilson’s book The Outsider.

Yet the “silly myth” of a provincial taking a sleeping bag to Hampstead Heath and reading Kafka and Nietzsche in the reading room of the British Museum proved to be an inspirational one. The nobody from nowhere who had attended a technical school showed he had something original to say, and – even to this day – many members of the Oxbridge-educated literary establishment have never forgiven him for that.

This blog page has the interesting end comment that “if his greatest achievement was to reveal the fallibility of the critical establishment, that was something worth doing, even if not what he intended”.

This obit argues that CW’s autodidactic nature is relevant in our Information Age.

Gospel According to Beelzebub

Write hard & clear about what hurts

All Things Creative
Ritual in the Dark

Essays and Reflections On The Work of Colin Wilson

Skulls in the Stars

The intersection of physics, optics, history and pulp fiction

The latest news on WordPress.com and the WordPress community.